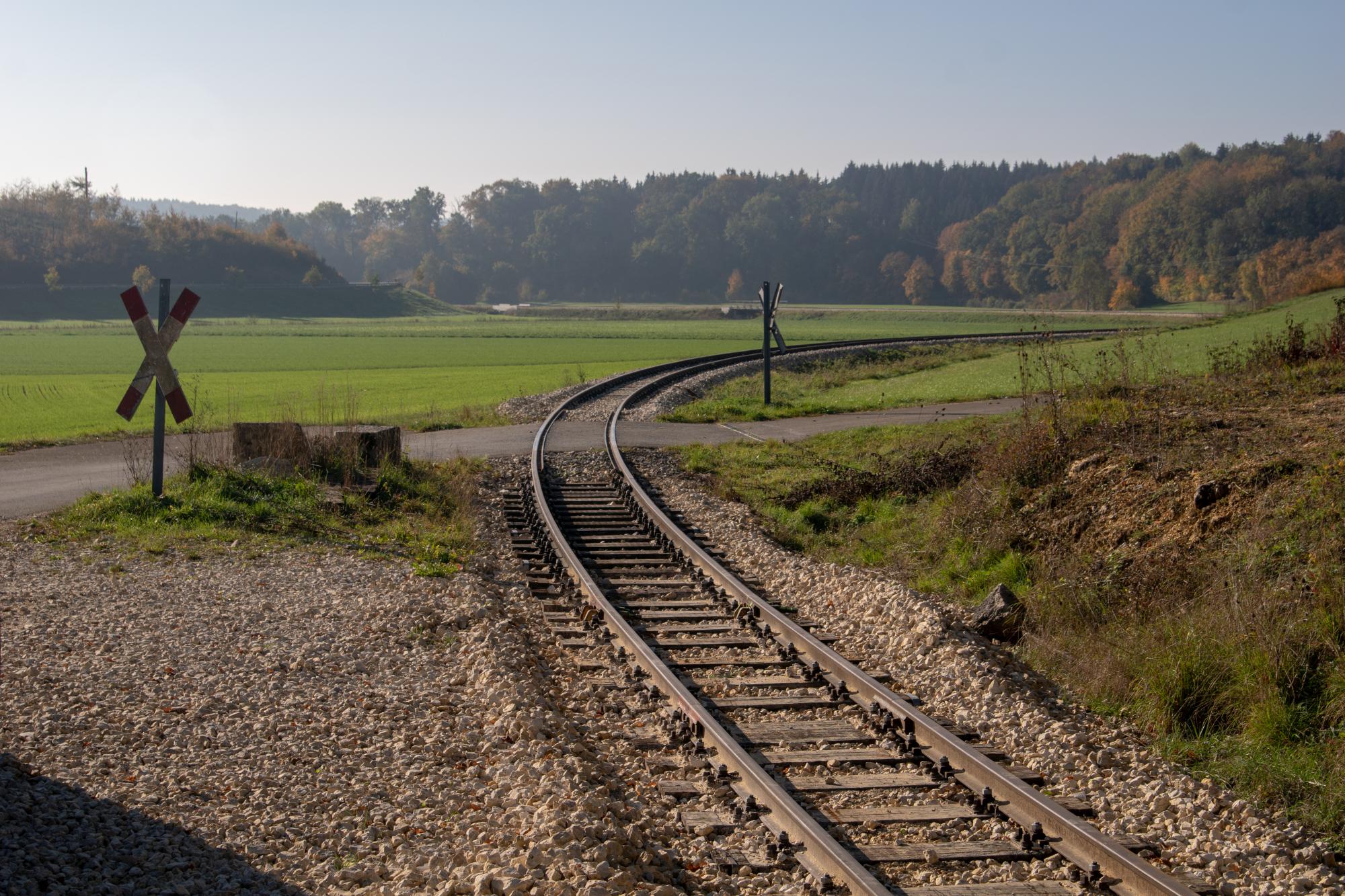 Over a length of 5.6 km, the heritage railway line is running through the picturesque Egau valley between Neresheim and Dischingen and ends on the shore of the Härtsfeld lake. A virtual journey along the rails, which have been reconstructed by enthusiasts since 1985.

Thanks to the former mayor of Neresheim, Mr. Hegele, the heritage railway line starting from Neresheim is running through the picturesque Egau valley. He provided the only founded Härtsfeld-Museumsbahn e.V. (Härtsfeld heritage railway association) the former station area as a residence after original plans to rebuild the spectacular ascent of the Alb from Aalen to Ebnat failed. Neresheim as the former most important station underway has been the operational center after the 1906 line's extension from Ballmertshofen to Dillingen on the Danube river and therefore also has been called central station. As being km 28 of overall 55.5 km length, it nearly hit the center of the line too. Neresheim was besides - of course - Aalen and Dillingen the largest place along the line and center of the Härtsfeld region. The baroque monastery with the impressing monastery church by famous architect Balthasar Neumann was an important support to attract passengers on the narrow gauge line. 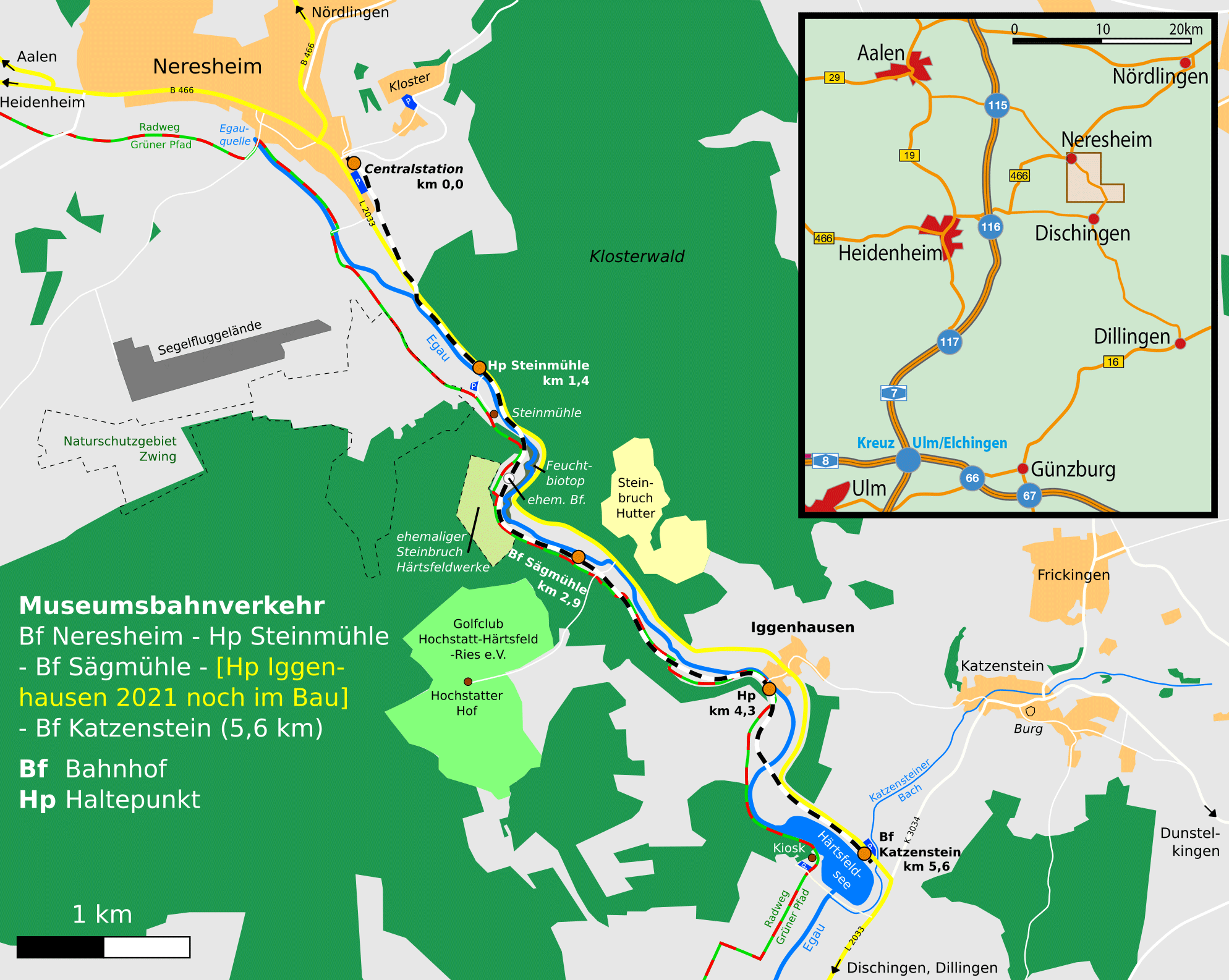 Routing of the line from Neresheim to Katzenstein. (Stop Iggenhausen still under construction). Based on OpenStreetMap. regional context: Otto Kurbjuweit.

Nearly all buildings, that once served railway operations, still exist today like the station building, which houses now a restaurant in its basement and the Härtsfeld railway museum on the first floor and the association's archive too. A 2008 raised outbuilding provides space for the ticket counter and toilettes for our passengers. On the other end of the station area, which once has been totally covered by tracks, one can find the two track locomotive shed, that serves today again its original purpose but as a workshop too. Separated by the line track heading towards the Egau valley there's the former workshop building, which nowadays is owned by the Neresheim gun club. Just next to it is a wooden storage just build into the flank of the hill, which is used the same way till today for both material and machines of our track constructers. In former times, this group used the wooden shed, which today can be found surrounded by tracks and with a big gate serves as a steam engine shed. Once upon a time he was found along the tracks and had no track inside. The track layout with a narrow curve between hill and shed origines back to the reconstruction in the 80s because the former space in the middle of the fairground at that time wasn't allowed to be used and so we needed to gain space from the flank of the hill.

Railway station Neresheim today. Clicking on the image leads to an interactive version.

The construction of new tracks startet from 1985 in a first glance to have suitable places to park the newly purchased vehicles. It helped a lot that in the same year the former associated narrow gauge line Amstetten - Laichingen of operator Württembergische Eisenbahngesellschaft (WEG, Württemberg railway group) has been put out of service, where besides of vehicles we could get track construction material like switches, wooden sleepers, rails and ironmongery. For that reason, you can find roll sign dating from 1899 to 1901 on some rails. 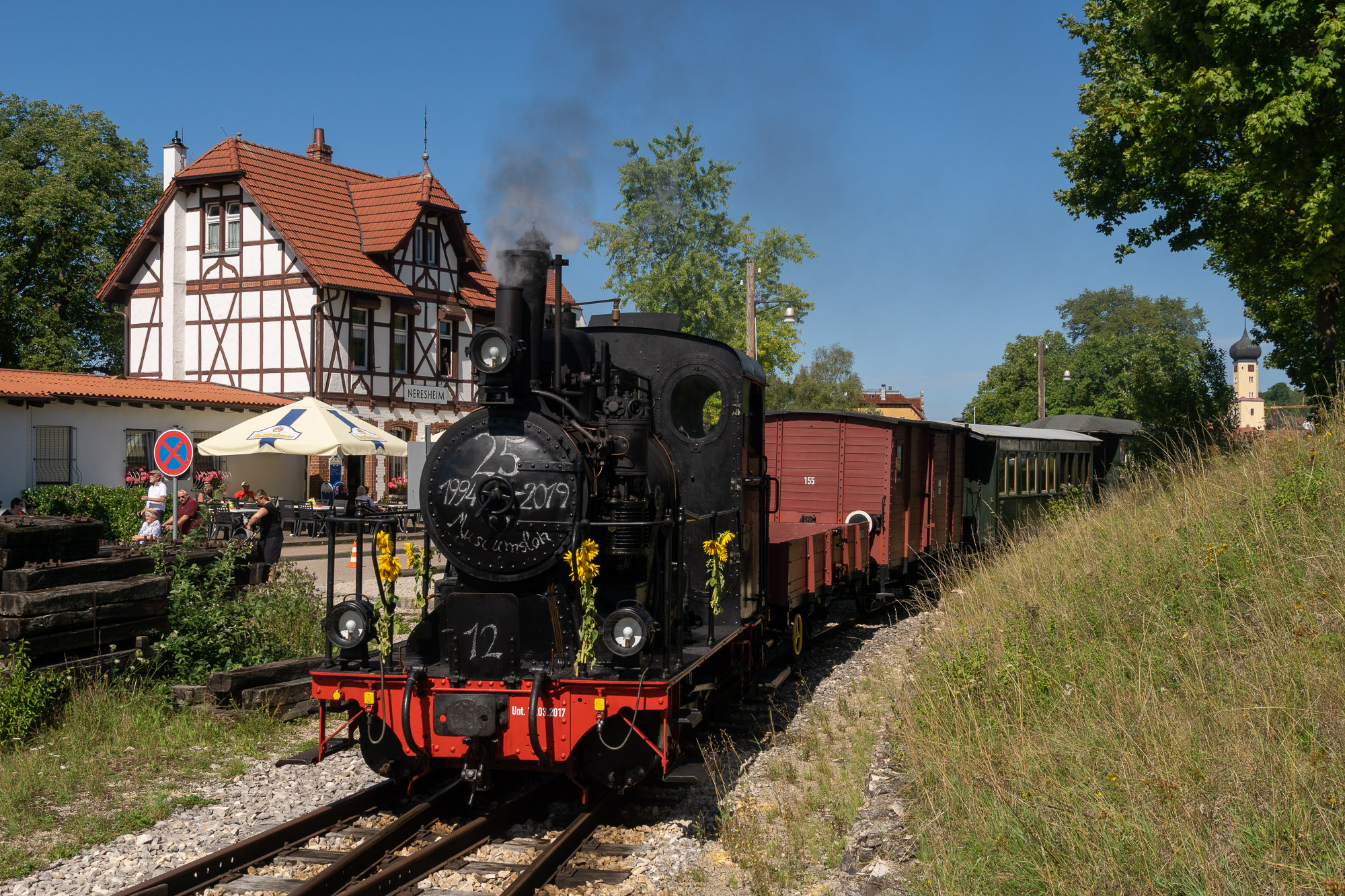 Loco 12 ahead a passenger train standing in front of the Neresheim station building ready for depature. (picture: Hannes Ortlieb)

The reconstruction of the line towards the Egau valley took place between 1996 and 2001, subsidized by the development program Rural Areas (ELR) of the land of Baden-Württemberg. Therefore, there has been build a new station exit track between the former workshop and locomotive shed. In former times, there has only been a storage track in this place, the historical exit was just opposite the locomotive shed and a straightforward extension of the straight across the monastery's field into the station. The new stretch uses a S curve and a new cutting, then hits the historical stretch. The railway embankment across the monastery's field had to be filled up again. Looking outside the window lefthandside in the direction of travel, one can see the gorgeous baroque monastery placed on top of the Ulrich hill designed by master builder Balthasar Neumann. Newly secured by half-barriers, the line crosses the road L 2033 in a narrow S curve to soon reach the Egau valley's ground. Placed in km 1.4, the stop Steinmühle was errected which once only has been an inofficial stop by demand on the level crossing. The eponymous stone mill (Steinmühle) already disappeared decades ago. From this stop, one can perfectly hike through the nature reserve Zwing. 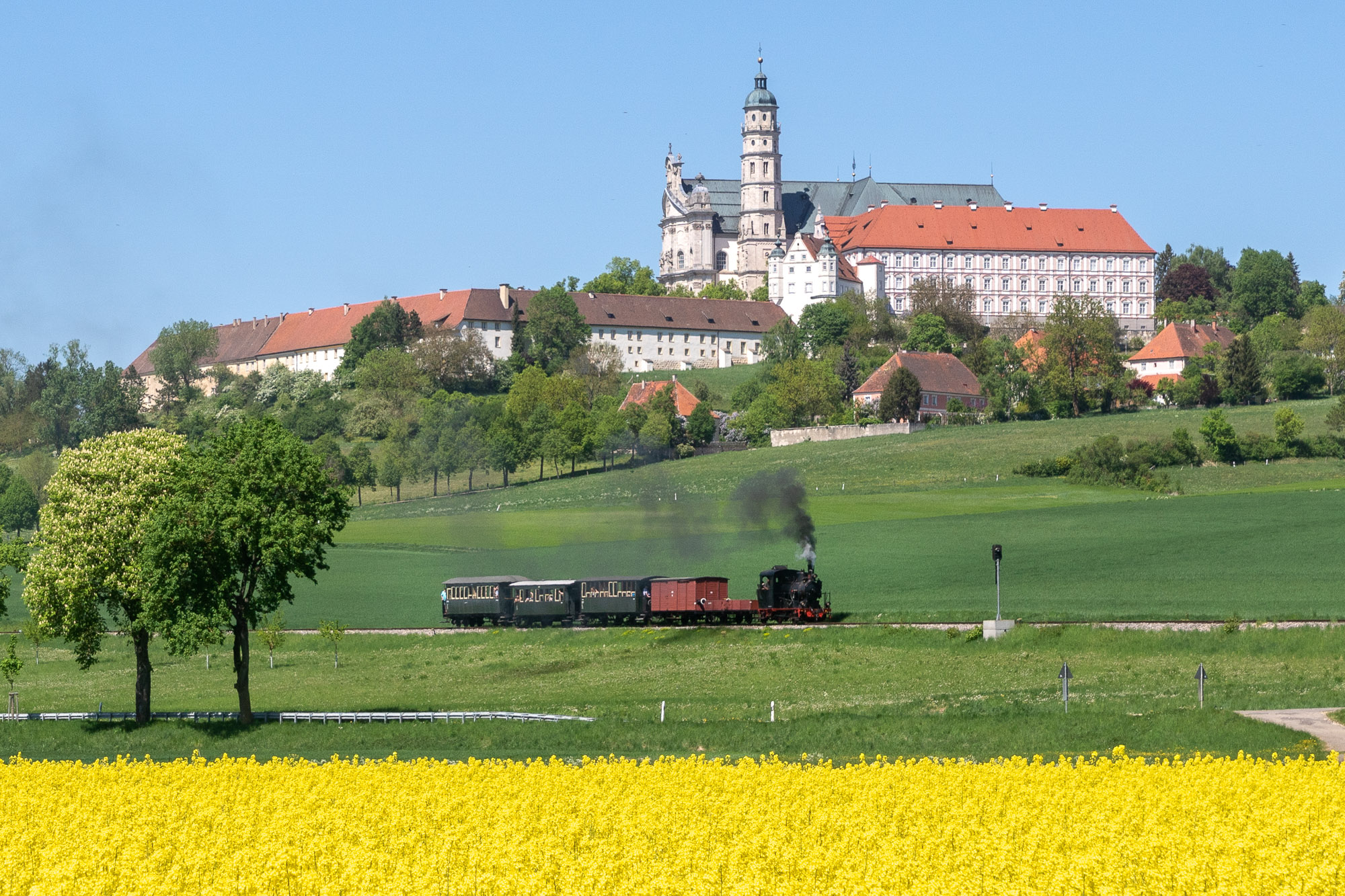 One of the most well known images of the Härtsfeld: steam train and baroque monastery on the Ulrich hill. (image: Hannes Ortlieb)

For several hundred meters, the railway line just follows the course of road and Egau river just to cross this stream by an original bridge dating from 1900 and change to the other side of the valley. At the end of the curve, there once was the most important freight customer of the Härtsfeld railway line, the Härtsfeld factories Neresheim, that had been founded parallel by the founders of the Härtsfeld railway line itself. Nearly nothing remained of the impressive factory building that once dominated the small valley in that place. Only an administrative building serves as a residential building today and towards the enormous terraces, a machine building survived. On the flank of the hill, one can see remains of a former inclined lift. One really needs a lot of imagination to believe that there once was a big station with several tracks along the straight. The view across the valley is nowadays blocked by a 1985 build wetland as a compensation measure for the construction of highway A7. 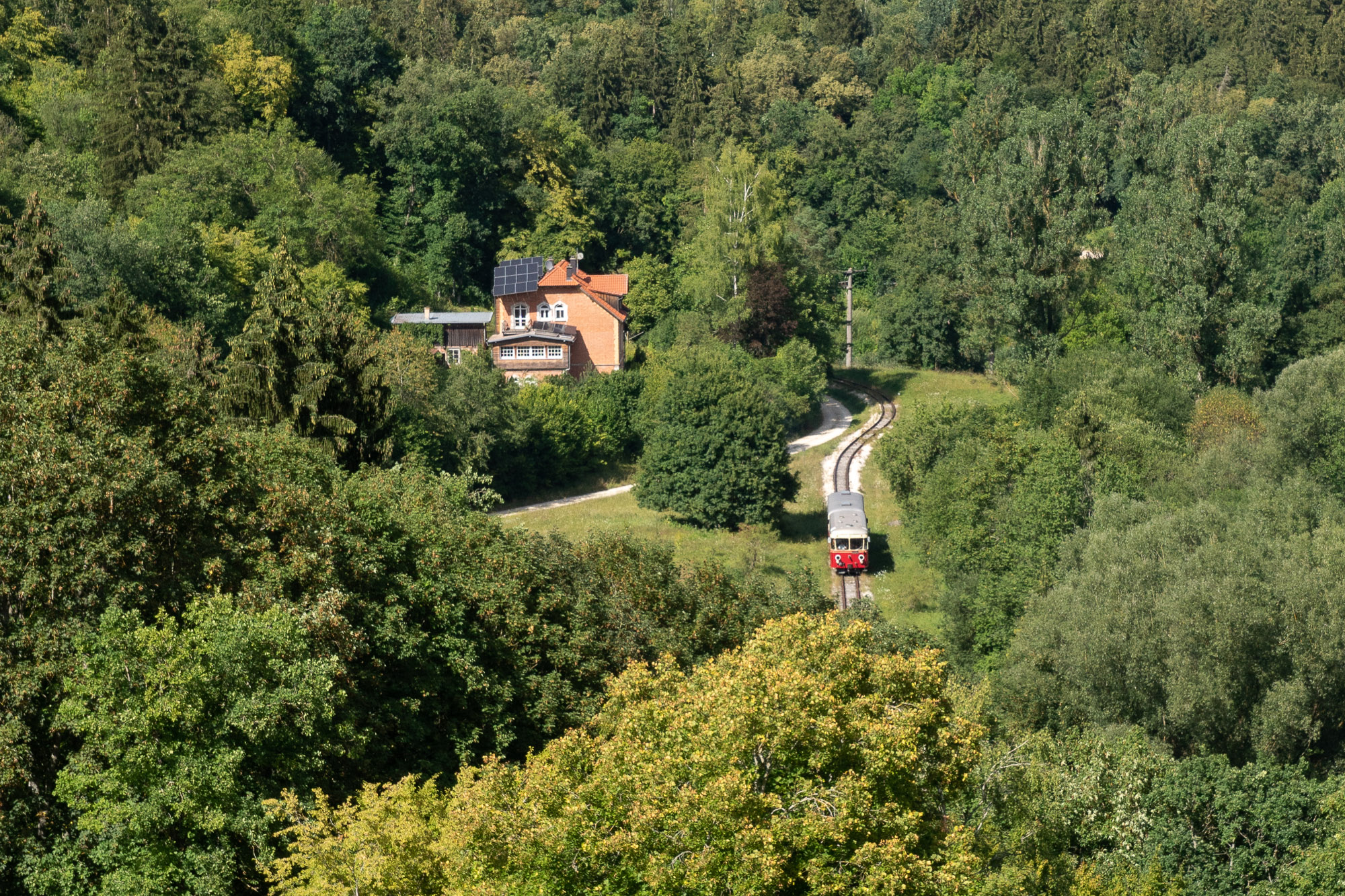 Just following the course of the hill's flank, in km 2.9 the line reaches the station Sägmühle, which served as the terminus for nearly two decades. Like the name Sägmühle (saw mill) implicates, it's once only been a simple station to load wood. The eponymous mill still stands directly on the Egau's bank and is supplied by its own mill canal coming from the Härtsfeld factories. A road passing by the mill upside the hill leads to the court Hochstatter Hof, today a golf club with restaurant. It was until this station that nearly exactly 100 years after it's first inaugaration in 1901 that the inaugaration of the heritage railway line took place on October 20, 2001.

After passing the saw mill, the line crosses the border between the rural districts Ostalbkreis and Heidenheim. Alongside the edges of the forest and fields, the line heads towards the next village in the valley, Iggenhausen. The bike lane, that once ran on the shut down path, now crosses the track three times and demands some fitness from cyclists without motor support. If there wasn't the rock near Iggenhausen - a piece that landed here from the crater impact around the nearby Nördlingen - the railway line could just reach straightly the lake Härtsfeldsee. But as it is, it needs narrow curves between Egau and the rock face to reach it's next stop at km 4.3. 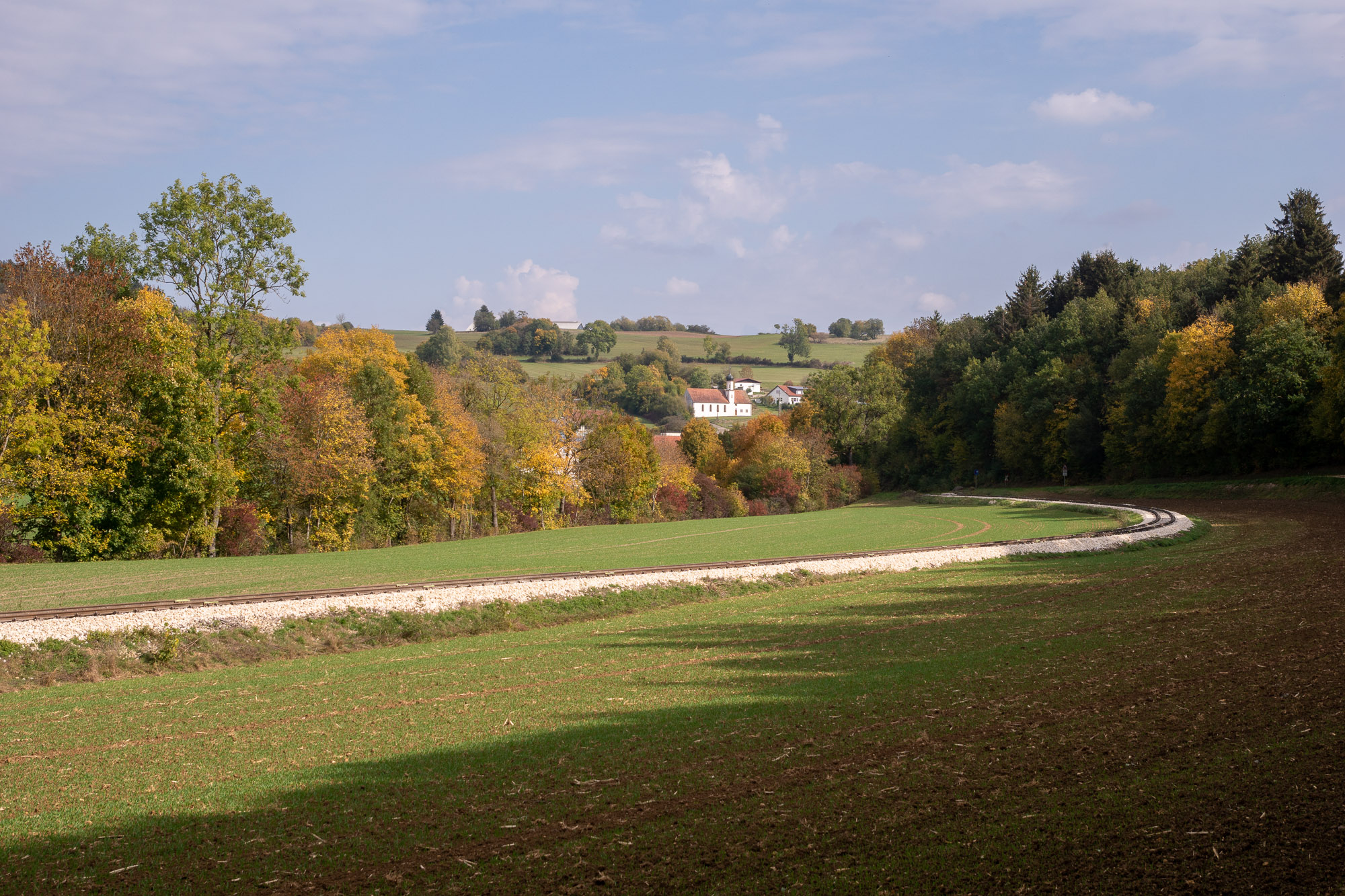 The reconstructed line in front of the setting of Iggenhausen in autum 2018. (image: Hannes Ortlieb)

After bike lane and railway line crossed a last time, the line changes the valley side again using a relatively wide curve while crossing the Egau again by using a bridge constructed out of steel and another flood bridge out of preconstructed concret pieces. Just below the road's embankment there's the place where the heaviest train accident in Härtsfeld railway history took place on May 1, 1964, when the two Fuchs railcars T 30 und T 31 crashed front into front after the crew of the one train missed to let pass the other train in the Katzenstein station as it was defined in the holiday timetable valid on that day. While the reconstruction of the line there still could be found pieces of the two vehicles in the ballast.

Delivering a bunch of rails to the construction site on the lake Härtsfeldsee's shore, railcar T 33 uses the embankment to change the valley side in front of the setting of Iggenhausen. (image: Hannes Ortlieb)

Just a few moments later, the lake's embankment will be reached. Parallel to it, the line heads its last meters towards the final station Katzenstein. Righthandside, one can have a look on the water's surface of this artifical lake that was errected just before the shut down of the Härtsfeld railway in 1972. On the lake's other side, there's the kiosk inviting passengers for a lunch, lefthandside, passengers may have a look on the tower of Staufer castle Katzenstein. After arrival, it's now time to put the traction unit on the other side of the wagon set to start again to Neresheim after a quarter of an hour. While changing on the wagon set's other end, the traction unit also passes over the nearly non-noticable small Katzenstein stream. The track laying behind this point shall once serve again for the final extension towards Dischingen. 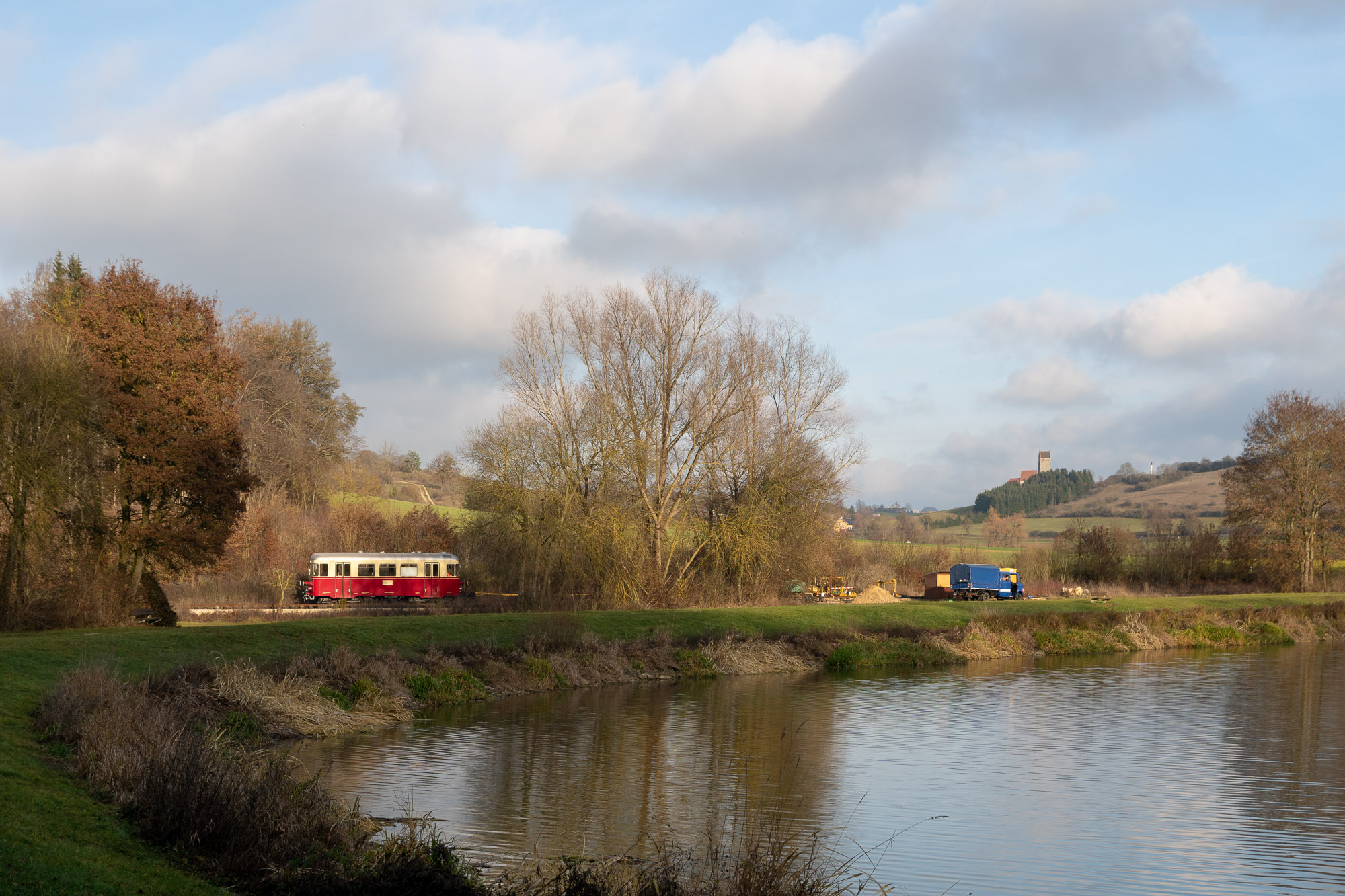 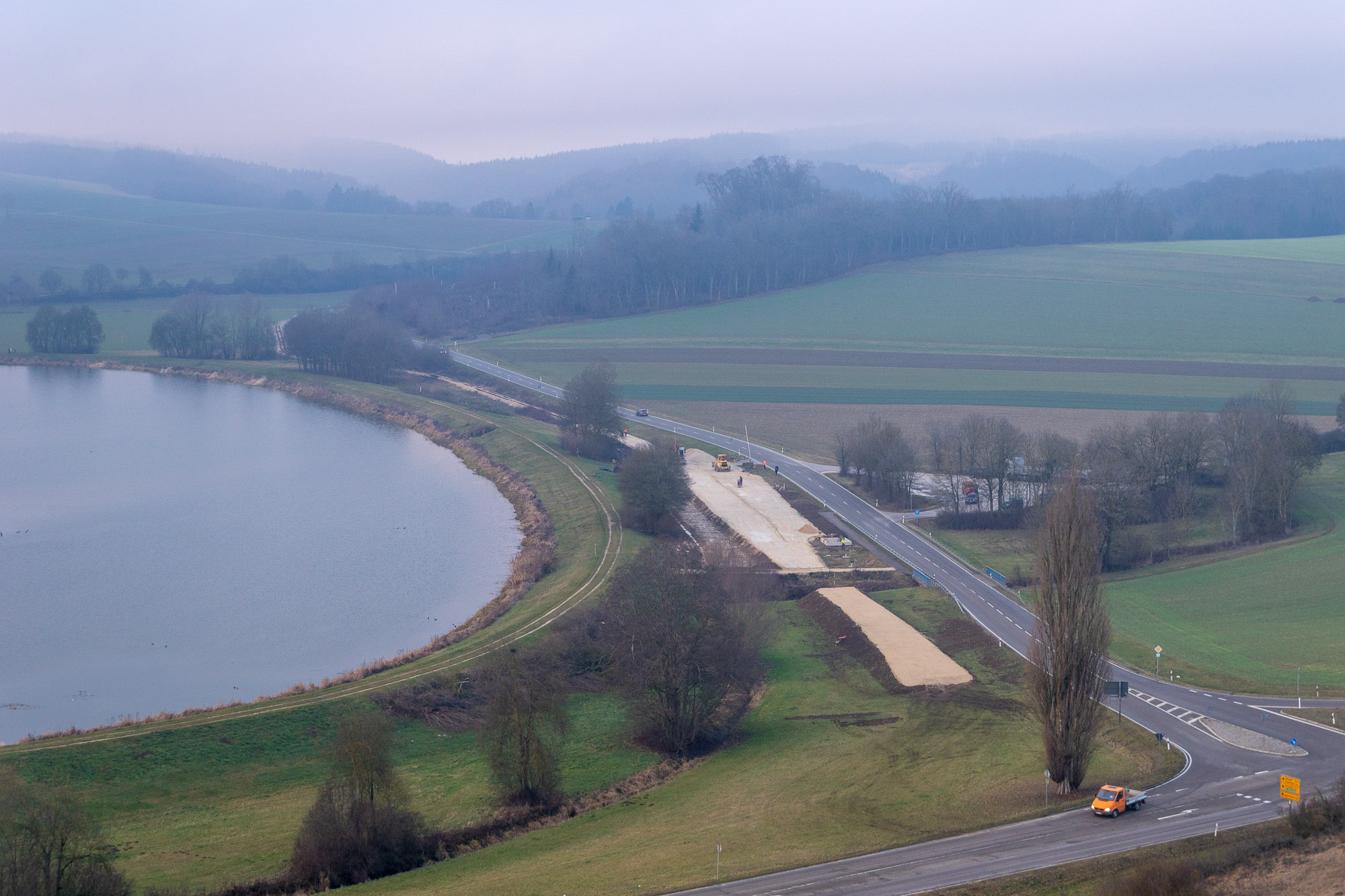 The new final station Katzenstein on the lake shore under construction in December 2019. (image: Hannes Ortlieb) 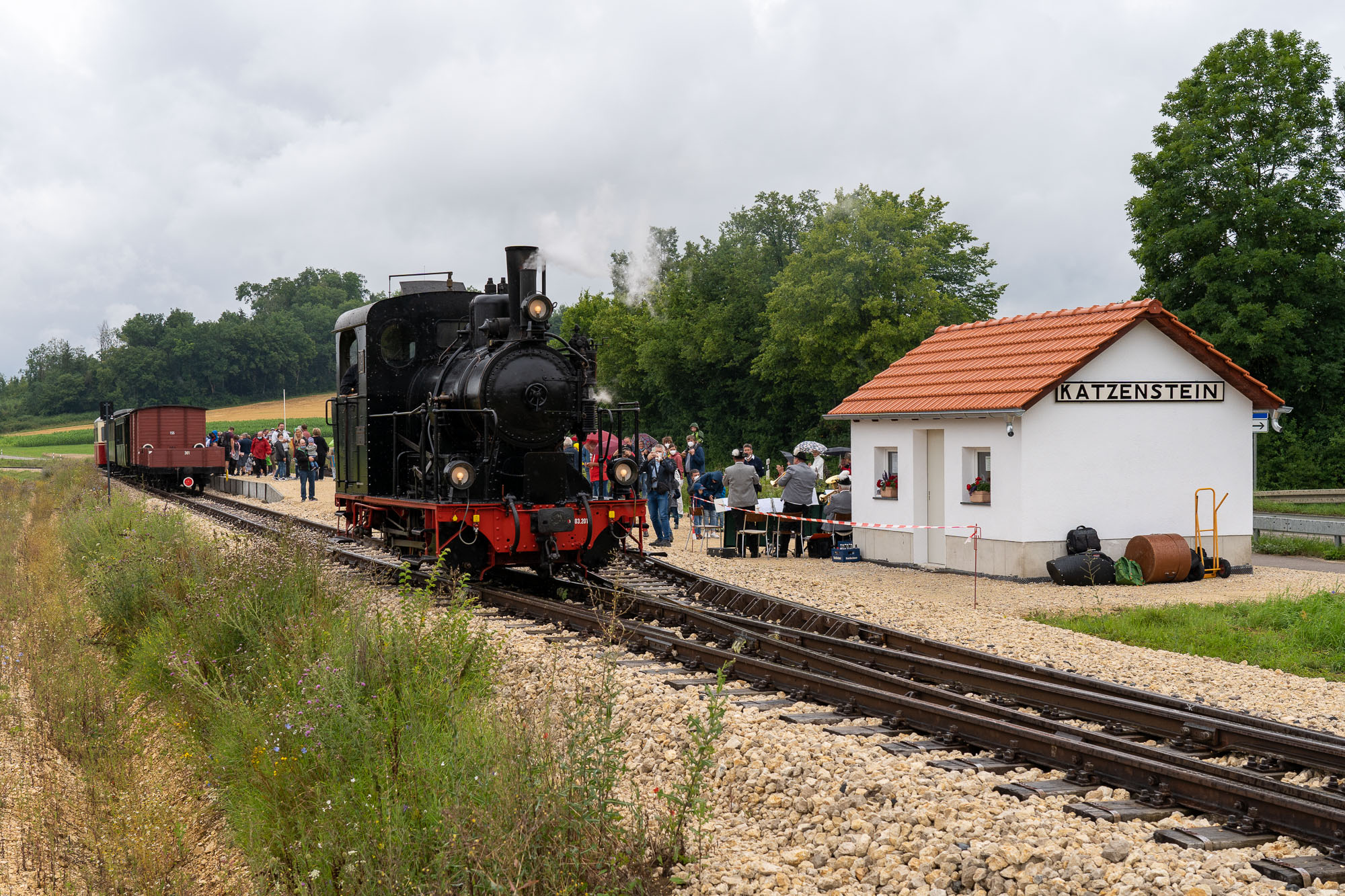 Steam engine loco 12 on its way to the other side of the wagon set passing by the reerrected waiting hall in Katenstein station. (image: Hannes Ortlieb)

In perspective, the further construction of the line over another 2.5 km until station Dischingen is considered. This third construction section wouldn't need any civil engineering works in contrast to its predecessors, but the road in front of Dischingen would have to be crossed again by a technically secured level crossing. In 2005, the association already bought the station building, which since then has already been restored for the biggest part and is open for visitors once a year while the countrywide Day of open monuments on the second Sunday of September. Further information on Dischingen station can be found here (German only).